We have another reivew on how to fix most of the problems here.

The Eachine Wizard X220 is a rtf quad that comes with everything you need to get you in the air except FPV screen/goggles. It includes the following: Out of the box you can see some of the extras not normally seen on most mass produce RTF quads. It has motor mount LEDs on all 4 motors and its carbon edges are highlighted in purple to match the 2205 2300kV motors, and motor guards pre installed. The frame looks quite sturdy and capable of handling some impacts, the arms are 4mm and the body is well braced. The Xt60 and VTX antenna both pass through a rubber grommet in the top plate to protect the wiring. The ESCs are Eachine branded 20A Blheli-S 2-4S capable, and the VTX is a 48 channel 5G8 200mW. Wiring looks fairly neat and solder joints are nice an shiny.

Total weight without battery is a bit high @ 386 grams. The supplied battery puts it up to 540 grams. 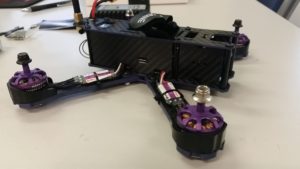 It comes with Cleanflight installed out of the box on a F3 board, with angle mode engaged and motor stop on. So the first thing I changed was to engage motors once armed.

Please note, it does not include a buzzer. And motors have CW and CCW threads.

I had high hopes for this beginners craft, despite it being a little porky. It appears reasonably well assembled and has some aesthetic qualities in a package that is geared towards the beginner/intermediate pilot who may be on a budget. I was disappointed to find out that the included 3S 1500mAh @ 25C was poorly selected for this craft. With a set of 3 bladed cyclones the quad could barely hover let alone ascend with any speed. Hovering was at over 60% on the throttle and full throttle resulted in a slow, gradual climb more suited to a aerial photography drone. I went back into Cleanflight to double check the Tx was calibrated correctly, and sure enough it was hitting 2000 on the throttle channel. So out of the box with the battery provided I would say its nearly unflyable, with 5 inch three blade props anyway. Perhaps it would be marginally better with a tradition prop, but I doubt it.